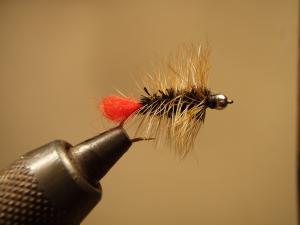 The Woolly Worm is an artificial fly commonly categorized as a wet fly or nymph and is fished under the water surface. It is a popular pattern for freshwater game fish and was a very popular fly in the 1950s–1970s in the west. Charles Brooks in Nymph Fishing for Larger Trout recommends the Woolly Worm as a general purpose nymph pattern in most western trout waters in any fly box. Woolly Worms are typically fished in streams, rivers, ponds, and lakes for trout, bass, and panfish. Today, Woolly Worms are tied in a variety of styles and colors to imitate a large aquatic nymphs such as stoneflies, dragonflies, damselflies or hellgrammites.

What does a Woolly Worm Imitate?

What does a Woolly Worm catch?